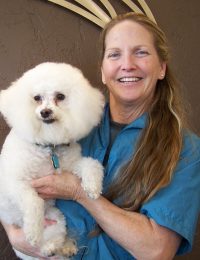 Renae started grooming in 1982, being apprenticed by a very experienced groomer. A few years later she moved to Las Vegas where she learned show cutting for a year. For the last 24 years she has been grooming in Sioux Falls. She joined our team in October 2011.

Renae has a Bichon Frise named Reggie (pictured), a cat (Lambeau) and a Golden Retriever (Clay).

She enjoys spending time with her family and in her spare time she enjoys horseback riding, gardening and cheering on the Green Bay Packers.

For emergencies outside of our normal business hours, please call the Veterinary Emergency Hospital in Sioux Falls at 605-977-6200